Snapchat Screenshot: How to ScreenShot on Snap Without Them Knowing 2022

How to screenshot someone's Snapchat story? That is not a difficult thing to do in the first place. Taking a screenshot of someone's snap is what you did when you loved its content that you want to keep a memory of it on your device. Or perhaps you want to share that snap with others because it might be a relevant thing for them as well. Another reason is when you find them shady, intriguing, or valuable as pieces of evidence. However, a possible problem may arise when the person who ported the snap knew you took a screenshot of their snap. That is because Snapchat notified users when someone took a screenshot of their contents. And this rule applies to photos, videos, chats, and stories on Snapchat.

This is why you should learn how to take a screenshot on Snapchat without being caught. With that, this post will show you ways of taking screenshots of Snapchat on an iPhone and Android with the most convenient and accessible ways and how to do so without notifying the snap owner. Make sure to read and learn because this might save you from the troubles of being caught.

1. How to Screenshot Snapchat on iPhone

Taking a screenshot on an iPhone is as easy as counting one to three. All smartphones have built-in screenshot features. However, different iPhone models also have different ways of taking screenshots. As an iPhone user, you must know how to screenshot your iPhone according to your model. But before you proceed, note that this method is best for you if you don't mind notifying the owner of the snap you want to capture. If you prefer to screenshot on a mobile phone without notifications, please move to Part 3 directly.

Steps on How to Screenshot on Snap for an iPhone:

Step 1To begin, open Snapchat on your iPhone and navigate to the snap that you want to screenshot.

Step 2Right away, a screenshot using button combinations on your iPhone. For iPhone SE and iPhone 5, press the Home and Top Power buttons altogether until it screenshots your screen.

For iPhone 6, 7, and 8, press the Home and Side Power buttons simultaneously.

Lastly, for iPhone X and later versions, press the Up Volume and Side Power buttons altogether.

Alternatively, you can also use your iPhone’s Assistive Touch to screenshot Snapchat. This method applies to any iPhone model. 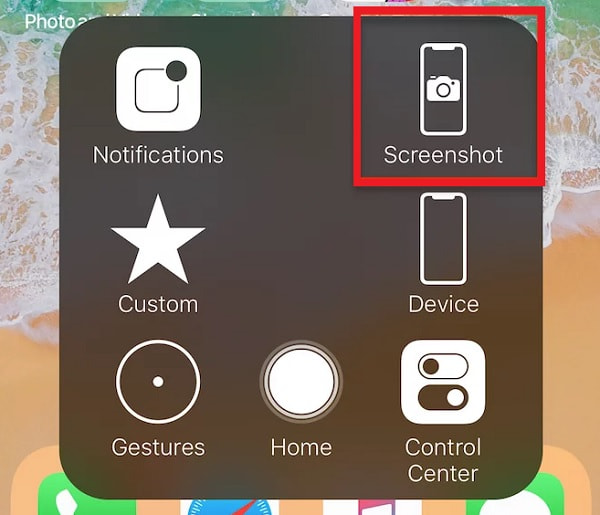 If your phone is an Android, refer to the steps below.

2. How to Screenshot Snapchat on Android

Steps on How to Screenshot on Snapchat on an Android:

Step 1First, open the Snapchat app on your Android phone and go to the snap that you want to screenshot.

Step 2Shortly, use your Android phone's side buttons to take a screenshot. If a home button is available on your phone, press the Home and Side Power buttons altogether.

Alternatively, you can’t do that if your Android phone has no Home button. If that is so, press the Volume Down and Side Power buttons simultaneously.

However, you must be careful about the Snapchat screenshot notification, especially if you intend to capture a snap from a stranger or a shady post. Nonetheless, the last thing you want is being caught for saving and seeming to be prying on others' Snapchat feeds. Let alone cause some troubles because of this. Thus, you will need some tricks to do that without notifications.

3. How to Take a Screenshot on Snapchat Without Them Knowing

While it is easy to screenshot on Snapchat, you can also do it without letting the snap owner know. With that, carefully read the solutions below.

How to Screenshot Snap Without Them Knowing Using Another Phone

The best way of efficiently capturing a snap without leaving any possible traces is by using another phone to do so. This method is risk-free because the snap owner cannot be notified about the capture, no matter how secure their accounts are.

Steps on How to Screenshot Snap Without Them Knowing Using Another Phone:

Step 1Open Snapchat on your phone and head to the snap you want to screenshot.

Step 2After that, take another phone, open its Camera, and take a picture of the other phone’s screen.

However, if you prefer to know how to screenshot Snapchat without them knowing on a computer, you should move to the next part.

Another way of safely taking screenshots on Snap without letting the snap owner know is by doing so offline. The app system detecting the action is barely possible if you are offline. So you might want to attempt taking screenshots using this method. After all, you're deemed offline, so Snap will not send notifications.

Steps on How to Screenshot a Snap Without Them Knowing by Turning Off the Internet Connection:

Step 1First, launch Snapchat and head to the snap that you want to screenshot and load it.

Step 2Second, open the Notification Bar on your phone and turn off WiFi or Mobile Data.

Step 3Once you make sure you are offline, head back to the snap that you want to capture and screenshot it right away.

This method is also a way how to open Snapchat without them knowing. Additionally, you may want to clear the Snapchat cache to ensure that no one knows about what you did. To do that, navigate to Snapchat on your Settings app, then tap Storage. Lastly, tap Cleare Cache.

Alternatively, you can also use your computer to take screenshots of Snapchat on your phone.

How to Screenshot Snapchat Without Them Knowing via Screen Mirroring

Screen mirroring your smartphone device onto your computer's monitor is also a great option. Through this method, your phone's screen is reflected on your computer. Thus, you can take a screenshot from there.

Steps on How to Screenshot Snapchat Without Them Knowing on iPhone via Screen Mirroring:

Step 1Start by heading to the Control Center of your iPhone. From there, tap Screen Mirroring or AirPlay. Subsequently, select your computer then your iPhone screen will appear on the computer screen.

Step 2After that, you can now go to the Snapchat app and go straight to the snap that you want to capture.

However, if you want a certified and guaranteed way of taking a screenshot on Snapchat without letting them know is through the help of a third-party program. This way, there is no way of detecting whether you take a screenshot or recording of your Snap feed.

FoneLab Screen Recorder is a program that features recording and capturing computer,  iOS and Android devices through mirroring. In addition to its performance and versatility, the best thing about this tool is that it takes high-quality snapshots that will be perfect for you. Further, how great is it to have the option of video capturing on Snapchat without letting them know proper? Below is an example of using an iPhone.

Steps on How to Screenshot Snapchat Without Them Knowing via FoneLab Screen Recorder:

Step 1Firstly, download and install FoneLab Screen Recorder on your computer. Subsequently, connect your iPhone to your computer using a USB cable.

Step 4Now, click the Record button. Then on your iPhone, open Snapchat, and head to the snap that you want to capture, or scroll through Snapchat as you wish.

Step 5Once you've already captured everything you want, click Stop on your computer to finally save your recording.

This method is also a way to screenshot a chat on Snapchat without them knowing.

4. FAQs About Taking Screenshot on Snapchat

Taking screenshots of someone else’s Snapchat is not entirely illegal by merely capturing it. However, some factors determine its legality or illegality. The top factor being considered is the content of the snap and your purpose for taking the screenshot.

What is a 100% Efficient Method to Screenshot on Snapchat without Knowing?

Although there are various ways to take a screenshot on Snap without them knowing, the best 100% effective way is still through a third-party tool. That is because it captures your Snapchat feed by mirroring your iPhone to a computer rather than your iPhone/Android phone directly. Thus you will be saved from being detected ultimately for taking a screenshot. With that, FoneLab Screen Recorder is the best way of doing so.

Why does Snapchat include screenshot notifications?

Snapchat’s notification feature is a step made by the app to let the users know when someone takes a screenshot of the content they put up on their accounts. As the app itself cannot prevent users from taking screenshots, this is the best effort they can make to protect their market. Further, screenshot notification has become more popular and implemented worldwide.

So, your hunt for ways to screenshot a snap is now finally solved. With that, you can now screenshot any Snapchat content efficiently and conveniently. Above all, FoneLab Screen Recorder would be the best choice under all circumstances because it is a tool that goes beyond the limit. Don't let your Snapchat experience and screen capturing be limited because of Snapchat notifications. Screenshot now and let every content you desire to be captured as you wish.