Nowadays, people require more and more computer space because more and more entertainment tasks, which including music, movie, game and more, will be applied on PC or Mac in addition to daily work or study events. That’s also why they need their computers to run more and more smoothly.

If you like playing games on computer, Steam might be one of the wise choices for you. As you know, it takes less space on computer so you can play games and even record gameplay without lag.

Steam is a cloud-based gaming library that enables users to download, buy and play games with their individual accounts. Steam gamers save much memory on computer as they can store large game collections on cloud services instead.

In this post, we will introduce informative topics you wanna know about Steam including how to record steam gameplay.

1. How to Record A Video on Steam

People records screen for different purposes, such as to record the procedure of game playing, save videos for sharing or offline watching, etc. There are countless methods for Steam recording.

Steam is still preparing a program which is called Simple Video Recorder to record gameplay for users. However, it is not available yet.

If you require a professional-like screen recording, the key is to choose a lag-free Steam screen recorder. This is what we will show you in this part.

Method 1. How to Record Videos on Steam | Recommended

FoneLab Screen Recorder is one of the most powerful tools you can try on both Windows Mac to record videos on Steam. Why? It is easy to record game screen with simultaneous audio and webcam capturing without quality loss. More importantly, you can begin recording directly without any figuration yet you can change these settings with simple clicks according to your needs.

Moreover, you are allowed to add annotations during recording to create a vivid video.

Below is how to record games on Steam.

Step 1Download and install FoneLab Screen Recorder from official site, then run it on computer.

Step 3Paly Steam games on computer. Click stop icon to stop recording once done. Choose a folder on computer to save the recorded Steam videos.

By the way, you can use FoneLab Screen Recorder to take screenshots in Steam through default hotkey Ctrl + Alt + C.

Game Bar is one of the new features that come with Windows 10. With it, you can capture screen without quality loss on computer while playing games after you enable this feature.

You are allowed to enable or disable audio recording, adjust audio volume and more in Game DVR tab.

It is a pity that this feature works on Windows 10 only, you need more alternatives if you are running earlier Windows versions or macOS.

Method 3. How to Record Gameplay on Steam via Bandicam

As a screen recorder tool, which is specialized in gameplay recording, Bandicam is helpful for Steam recording. You should know that it has a Game mode, so you can click on it directly to begin recording Steam gameplay.

Step 1Click Game recording on the main interface, then start playing your game. 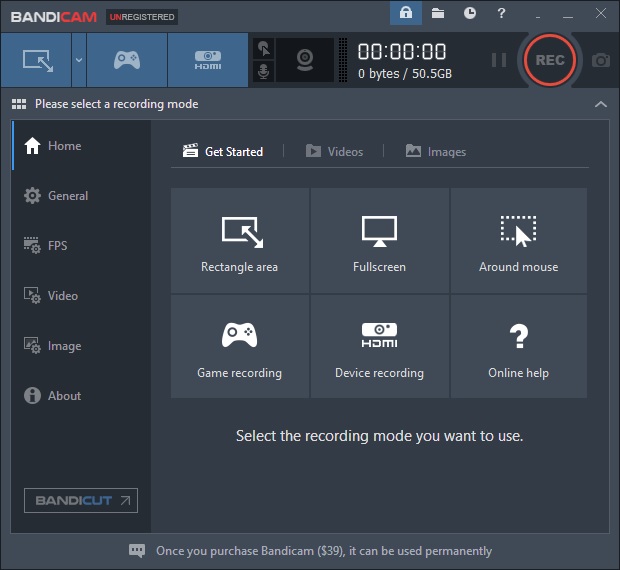 Step 2Click the REC button or press F12 on keyboard to begin recording.

Step 3Click stop icon or press F12 on keyboard. Finally, you can find your videos through Home > Video. 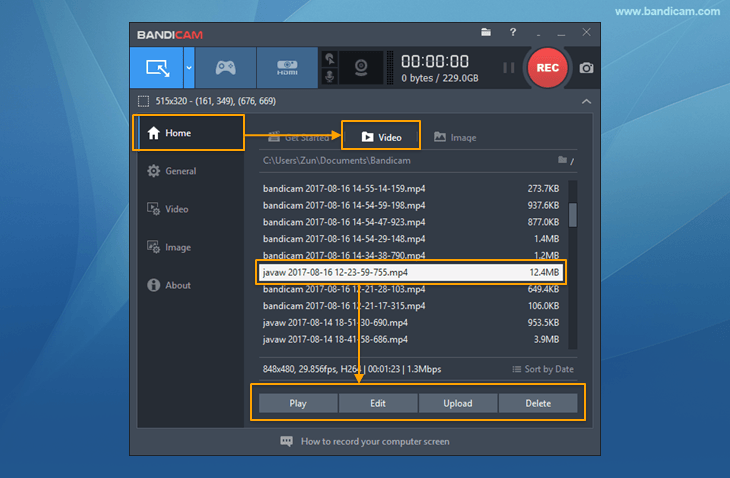 What to do if you are a Mac user? Quicktime might be a worth-trying tool.

Method 4. How to Make A Video on Steam by QuickTime

Quicktime is always the default option to play media files on Mac. It can even be a QuickTime recorder to capture screen on Mac without additional tools. Check below demonstration about how to record with steam.

Step 3Play Steam game that you want to record on computer.

Step 4Stop recording when you are done.

You might find that it won’t capture system sound for you. Therefore, you need to upload another alternate audio file when you want to upload a Steam video with audio.

Method 5. How to Record Steam Games with OBS

As an open-source program, OBS Studio is a screen recording tool that you should not miss to record steam games if you are looking for a free screen recorder. It supports various video formats, so you don’t need to spend time to search ways for format compatibility.

But you should pay attention that it is a few complicated compared to other tools. It is better that you can choose other user-friendly options like FoneLab Screen Recorder.

In addition to Steam screen capture, another frequently-asked question is about how to screenshot in Steam game.

You have 2 options to take screenshot in Steam. Firstly, if you have enabled Game bar on Windows 10, you can easily use Win + G to enable task bar and click the second screenshot icon or press Ctrl + Alt + Prtsc take a Steam screenshot.

Another way is recommended to people who want better Steam screenshot quality. You just need to open FoneLab Screen Recorder and use the hotkey Ctrl + Alt + C to screenshot Steam screen.

If you have uploaded videos to YouTube, you can also learn how to post a video to Steam as below if you want to share Steam gameplay. 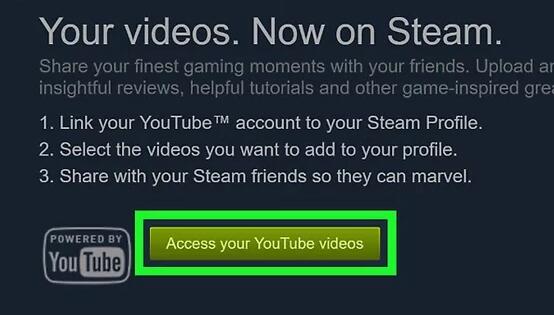 Step 3Choose a video from the list on the left side and associate the video with a game from the right side. Click Add video and post the Steam video. Then you can find it on Steam video library. 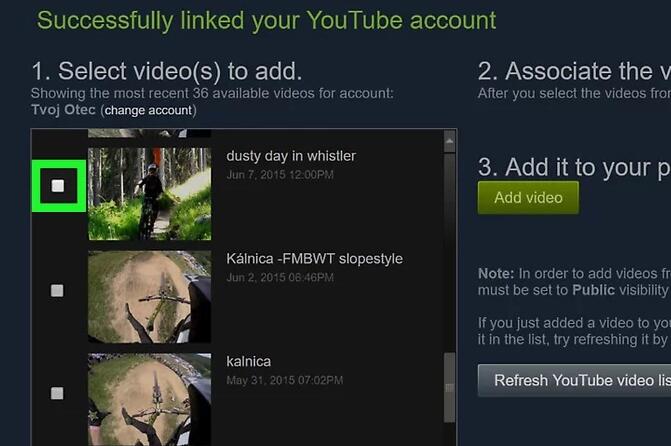 How to Upload A Video to Steam

Moreover, you can also upload a video directly if you are a partner. Below is detailed instructional steps to upload videos to Steam. 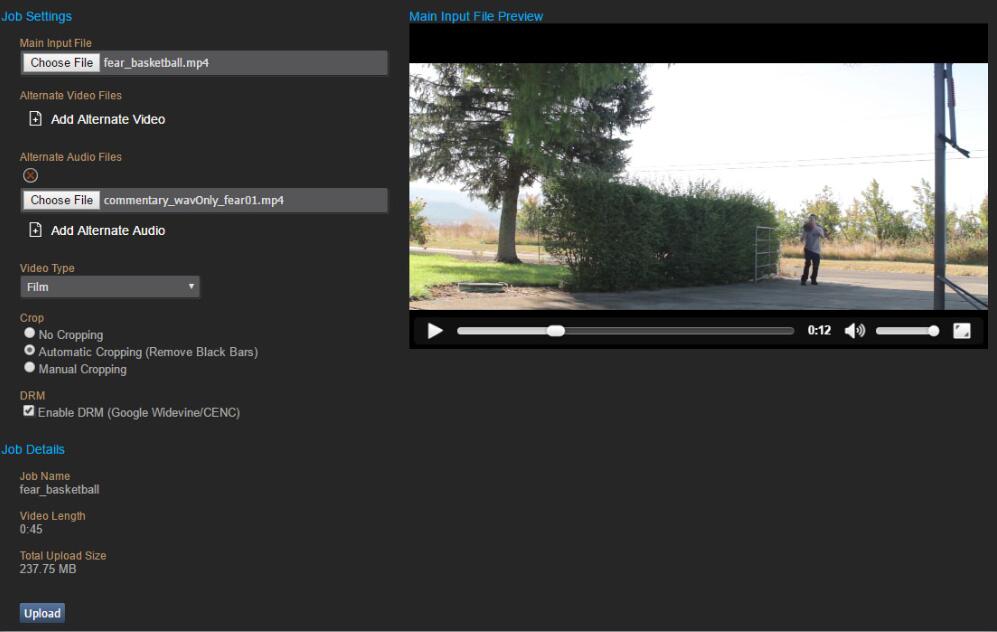 That’s all about how to record video in Steam, FoneLab Screen Recorder is the best choice for you no matter you want a tool to record a professional or simple video. Why not download and have a try now!