How to Record a GoToMeeting Session and Convert G2M to MP4

GoToMeeting provides a simple way to record all of the webinars using its platform. If you are a Windows user, you can easily download codec to record and play the WMV file created by GoToMeeting. You are able to record the GoToMeeting sessions, or called webinars with ease, as long as GoToMeeting configures the recording preferences prior to the webinar start.

However, many users complained that they failed to open the GoToMeeting recordings, either on Windows PC or Mac. Are you one of them?

1. How to Record a GoToMeeting with Built-in Recorder

Step 1Click View on the Organizer Control Panel and choose the Recording option. There will be a Recording window appears on the screen.

Step 2Click on the Settings in the bottom-right corner. Here you can adjust the video and audio recording options based on your need. Moreover, you can select the output format. During this step, you are allowed to choose Windows Media Player as the output file format. By doing so, you can view the GoToMeeting recording file with this player. Click OK to confirm the operation.

2. How to Convert GoToMeeting G2M File to MP4 PC

If you don’t have any specific settings, the recorded GoToMeeting file will be saved in G2M format. As mentioned above, the G2M file can not be opened by your media player. So it’s quite necessary to convert G2M to MP4 or another popular video format. You can convert GoToMeeting recording to MP4 with the Recording Manager. The following guide will show you how to do it.

Step 1First, you need to launch the GoToMeeting Recording Manager. It may automatically open after the recording. If not, you need to run it manually.

Step 2Choose the Convert Recording option and then choose the GoToMeeting recording file you want to convert under the Recordings You Need to Convert.

Step 3Choose your preferred output format from the drop-down menu of Choose a file format. You are usually offered 2 options, MP4 and WMV. Here you can choose MP4 as your target format. 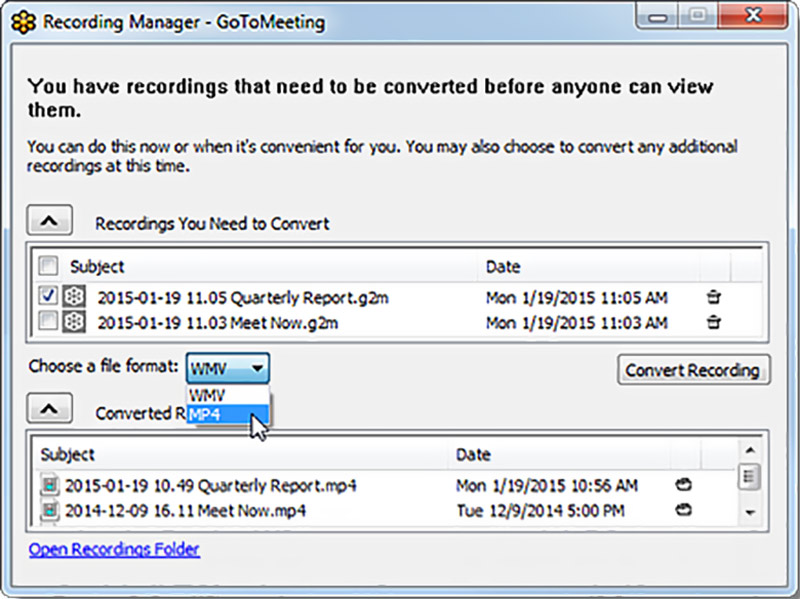 Step 4Click on the Convert Recording button to start converting GoToMeeting recording to MP4. After that, the original G2M will be converted to MP4.

FoneLab Video Converter is hightly recommended to you. You can easily download it from official site, and then run it on computer to convert video format easily.

3. How to Directly Record GoToMeeting Session as MP4 File

It will take really long time to complete the G2M to MP4 converting with the GoToMeeting Recording Manager. In fact, you can choose to directly record GoToMeeting session as an MP4 file with the powerful GoToMeeting recording software, FoneLab Screen Recorder.

Step 2When you enter the main interface of Video Recorder, you can custom various recording features. You can set the recording area, audio recording source, webcam and more. 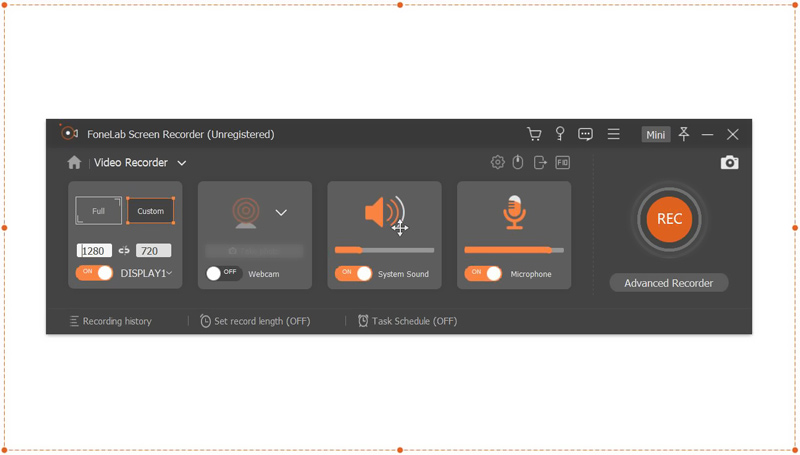 Step 3Click the REC button to start the GoToMeeting session recording process. While the recording, you are allowed to pause or take screenshot at any moment. Click the Stop button when you want to stop the GoToMeeting recording.

Step 4After recording, you can preview the captured GoToMeeting file and edit it according to your need. Then click the Save button to save the GoToMeeting recording on your computer as an MP4 file.

With the adoption of the advanced accelerate technology, this GoToMeeting recorder can give you a fast and high-quality recording experience. More importantly, it enables you to record a GoToMeeting session with exactly original image quality, even up to 4K UHD. Just free download it and have a try.

4. FAQs of The GoToMeeting Recording

Question 1. Where is the GoToMeeting recording stored?

After recording a GoToMeeting session, the recording file will be are stored in C:/Users/<user>/Documents by default. The pre-converted G2M file will be saved in the subfolder called originals.

Question 2. How do I record GoToMeeting on my iPhone?

If you are using an iPhone and want to record a GoToMeeting session, you can rely on the iOS built-in Screen Recording feature. You can enable and add this feature in the Settings app and choose Control Center > Customize Controls.

Question 3. How do I see everyone in GoToMeeting?

You can check all your meeting participants in the People pane. It gives you access to GoToMeeting controls. You can click the Arrow icon next to the participant's name to see and set all options like Mute audio, Promote to Presenter and Co-organizer.