I like taking photos with my Samsung phone. Camera is one of the most important apps for me. My Android phone notifies me that the storage of my phone is running out, I have to delete some data, maybe thousands of photos on it, to free up some space. So, how can I backup this photos firstly, all of them are precious to me. Please help, thanks!

This is a common situation for mobile phone users as the mobile phone is not a tool to make phone call or send text messages only already.

The smartphone helps people listen to music, take photos, save documents, etc. It is no doubt that it requires a large internal storage for data saving.

Amount of photos, videos, files and more will eat up the most of space on your Android phone, and then you will be promoted to remove some data in daily running. 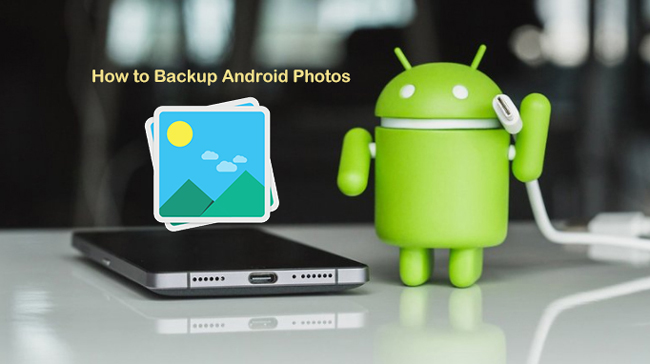 There are several different reasons to cause data loss, such accidental deleting, system crash, cracked screen and more.

Losing data will be a big disaster for mobile phone users without backup file. There is no ensured method to recover lost data without data loss.

Inclusion, that’s why you need to backup Android data in time.

The better option is to make a backup file regularly, but some of Android phone users don’t have the custom to backup data at all.

In some users’ opinion, backing up Android phone data might be a complicated task.

But it isn’t. Here we will introduce 6 simple ways to backup Android photo in a few steps.

Unlike iPhone and other Apple products, Android phone’s operating system is its mostly unfettered access to the file system, so that you can easily connect and move your Android data.

1. How to Backup Photos on Android with USB cable

Most of Android phone users might have tried this way to transfer data between device and computer. It is the first option to backup Android photos if you don’t want to use other program or tools.

Below is how to make a backup file of Android phone photos.

Step 3Then choose Import pictures and videos on the pop-up window on your computer.

Step 4Use it to drag files to your computer.

There is limitation of backing up Android photos using USB cable transfer.

It allows you to move photos, videos and songs only.

Is there any way to backup Android contacts, messages, call logs and others expect photos?

FoneLab Android Data Backup & Restore will be recommended to you if you want to backup different data and prefer to backup data selectively.

And you can add a password to the backup file if you want to protect your personal information from data disclosure.

You can check below simple operation steps to backup photos on Android phone.

Step 1Download and install the program on your computer, and then double-click to launch it if it doesn’t open automatically. 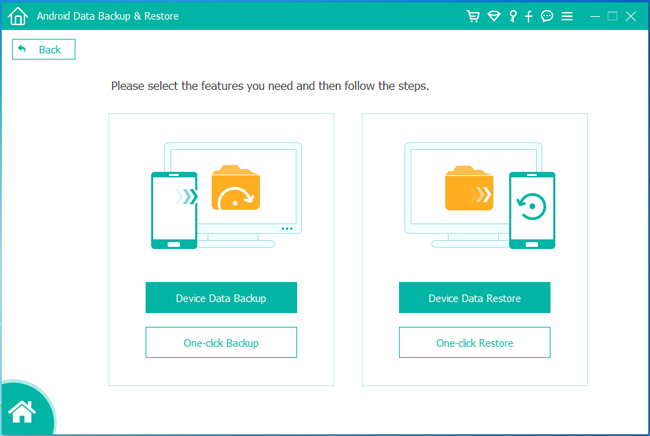 Step 3Choose Gallery you want to backup, and you can tick the box next to the Encrypted Backup on the bottom of the window if you want. Here you can also backup android contacts to pc by clicking Contacts. 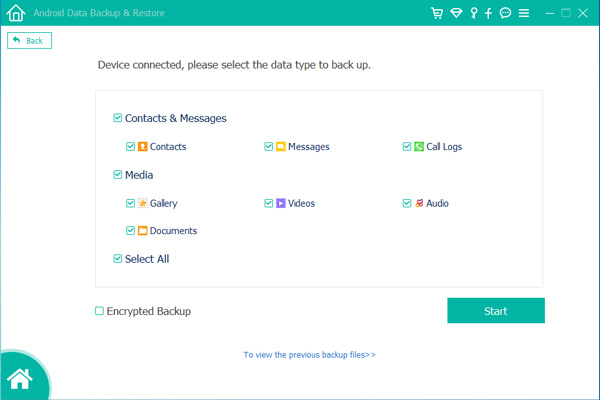 Step 5Click OK on the pop-up window, and then it will begin to backup Android photos.

Read more about How to backup call logs from Android.

How can you do if you don’t want to backup Android phone pictures to computer?

Cloud service is everywhere nowadays, it can be your alternative for backing up Android data to computer.

It won’t require computer or other tools, you just need to download the software on your Android phone, and then log in your account to backup or restore data you want.

There are different cloud app you can choose as Android photo backup app. Such as Google Drive, OneDrive, Dropbox, Google Photos and more.

Below are some simple introductions of how to backup Android phone photos to cloud.

3. How to Backup Android Phone Photos by Google Photos

Google Photos is an app, which offers by Google Inc., features in backing up Android photos to Google account. Google Drive has a large google picture storage of 15GB and backs up photos and videos with taps. 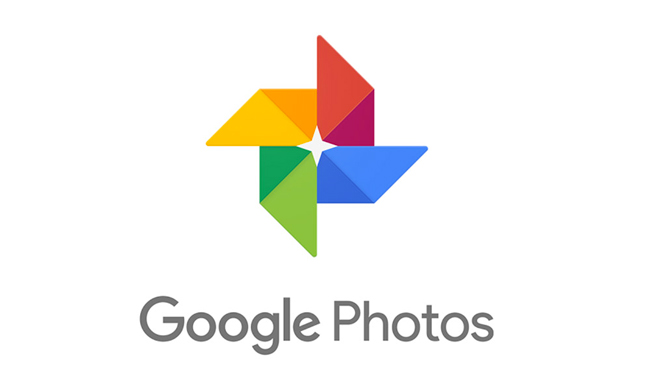 Let’s walk through how to use Google photo uploader to backup Android phone photos.

Step 1Download Google Photos and then install it on your Android phone.

Step 4Toggle to turn on Back up & sync.

You might have doubt about what is the difference between Google Drive and Google Photos.

4. How to Backup Phone Photos on Android via Google Drive

Please keep in mind that:

Google Drive also allows users to backup Android calendars, contacts and documents with its 15GB free storage space except for photos or videos.

It doesn’t have a complicated process, so you can complete backup photos to Google Drive with ease. 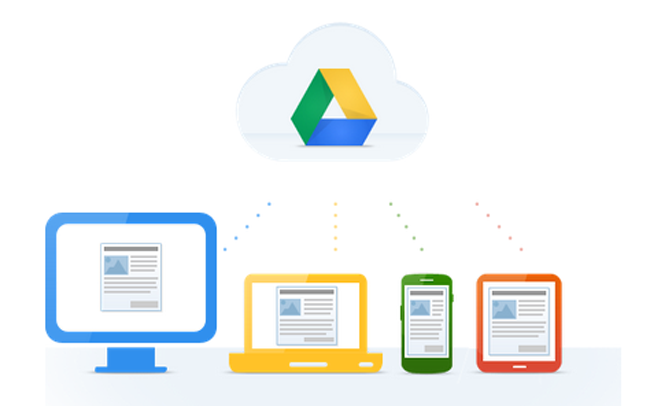 Step 2Tap the circle upload button and then tap on Upload > Photos and Videos.

Step 3Choose the photos you want to backup to Google Drive from Android phone. 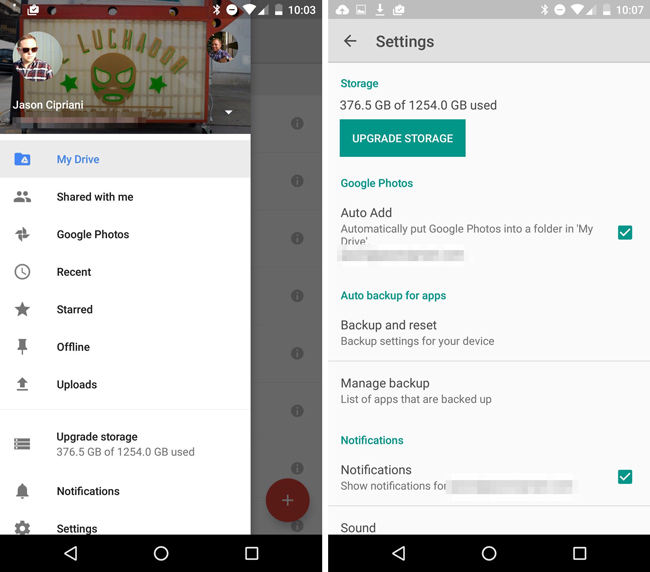 5. How to Backup Photos on Android to Dropbox 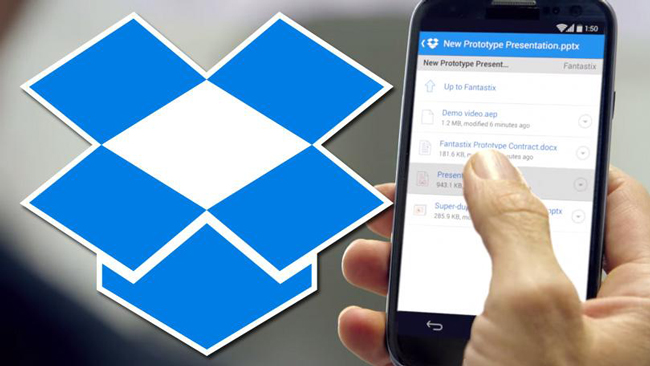 As an Android backup app, it enables Dropbox users to backup Android phone photos, videos or files to cloud, and synchronize files to device directly.

Below is a detailed instruction to backup pictures on Android to Dropbox.

Step 4Select the photos you want to backup and then tap Next. You can tap the Select All in the upper right corner if you want.

Dropbox has an online picture storage limitation of 2GB, so you need to pay attention that if you have enough space for your backup data.

We will say something about the last file-hosting service: OneDrive.

6. How to Backup Android Phone Photos via OneDrive

Microsoft release and launched OneDrive on August 1, 2007, and it is available in 107 languages. OneDrive app for Android is the same as other file hosting services, which allows you to backup and restore data on Android. 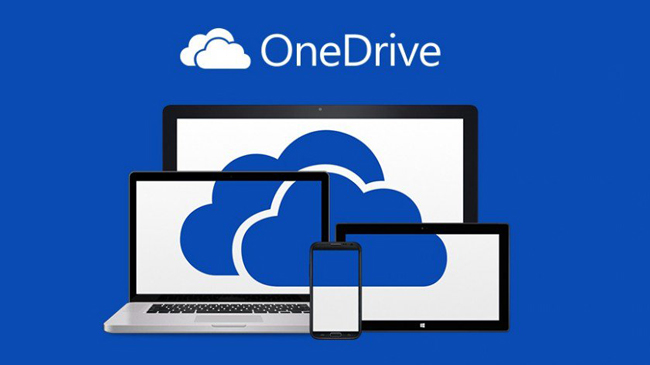 Its free cloud picture storage is 5GB for each user, and it allows users to go premium if you would like to upgrade your space the same as other file hosting services.

Let’s move to the process of using OneDrive to backup Android photos.

Step 1Search OneDrive on Android phone, and then download and install it on device.

Step 3Tap Files on the bottom, and then + icon on the upper right.

Step 5Choose the photos you want to backup and then tap Done. 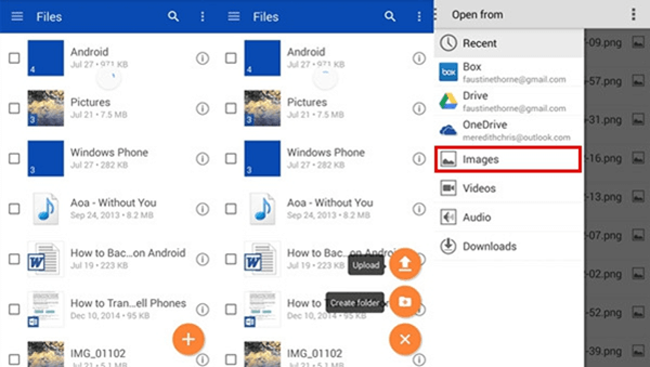 All these methods are verified times to confirm if it is work or not. It is no doubt that there are still other different ways to backup Android photos, choose a suitable way according to your demands.