4 Proven Ways to Sync Contacts from iPhone to iPad

Contacts are among the most important data that you can save on an iPhone. But, at the time when you decide to buy a new iPhone and plan to give the old ones to someone or just store it, you will need to sync your contacts on your new phone so that you don't have to do it manually. At times, there will be cases when you need to access your contacts from your old iPhone or iPad and for instance you don’t want to look for contacts you are trying to reach or call every now and then. For that very reason, syncing contacts between these devices is important. Learn how to sync contacts from iPhone to iPad using the sure-fire ways that we will geek on about below.

1. How to Sync Contacts from iPhone to iPad with FoneTrans for iOS

FoneTrans for iOS is a program excellently built and designed for transferring data across a computer, iOS devices, and iTunes selectively that allows you to select and move data in any way you want. With just clicks away, you will be able to manage files including photos, videos, contacts, messages, documents, and many more, even if you do not have much background in transferring data across iOS devices. When we say across iOS devices, that means nearly all iOS devices.  Even so, when syncing or transferring using this program, it will not erase your data before or after you do a transfer. One of its remarkable features is that it does not modify or save your data at the same time as taking only a small amount of storage on your computer. Lastly, it can be downloaded and installed on Windows and Mac computers.

Steps to Sync Contacts from iPhone to iPad with FoneTrans for iOS:

Step 1First, download and install FoneTrans for iOS on a computer. After that, it will be launched automatically. If it is not, just double-click the icon on your desktop to open it. 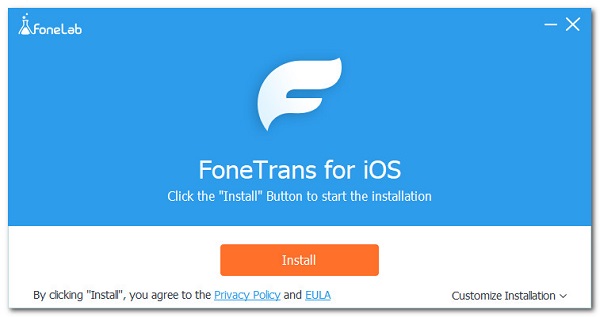 Step 2After that, connect your iPhone to your computer via a USB charging cable. Make sure that it is connected properly, then permit both devices to Trust to be recognized by the program.

Step 3Click the Contacts button on the side menu, then tick the checkbox to mark all contacts. Lastly, click the Export Phone icon and destination device to prompt your device to start syncing it on your computer. 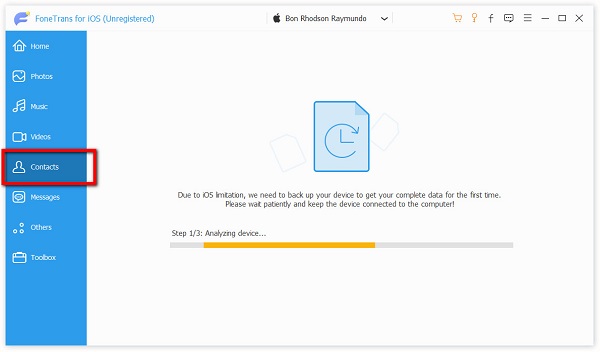 Step 4Now, disconnect your iPhone to the computer. Using the same charging cable connect your iPad, then on the screen tap the Trust button to permit the program to access your iPad. Then, on your computer file explorer, locate the contacts from your iPhone then sync them to your iPad.

2. How to Sync Contacts from iPhone to iPad with SIM Card

AirDrop is a built-in feature of an iPhone or iPad that can be used as an alternative way if you want to sync your contacts from your iPhone to your iPad if you do not want to do it without downloading and installing an additive tool. If you are an iOS user, you have probably heard of AirDrop as it is the most popular way of syncing and transferring files. Technically, it is a proprietary ad hoc service that was first launched in Mac OS X Lion (Mac OS X 10.7) and iOS 7, which allows users to transfer files over a short distance by calibrating the network settings of their iOS devices.

Steps to Sync Contacts from iPhone to iPad via AirDrop:

Step 2Go to your Phone application on your iPhone then select the contacts that you want to sync to your iPad.

Step 3Tap one of the contacts, then tap the Share Contact. On the pop-up panel, tap the AirDrop to prompt your iPhone to share it via AirDrop.

Step 4After that, select [name of your iPad]. Click Done on the upper-right side of the screen. On your iPad, click the Allow button to start the syncing process.

3. How to Sync Contacts from iPhone to iPad with AirDrop

If you want to sync contacts from your iPhone to iPad wirelessly, you can use the built-in feature of iOS devices which is the iCloud. Technically, it is capable of holding and safely storing your music, photos, movies, documents, and other files. This storage includes a free email account and 5 GB of free storage for your data. When you use iCloud, you can access your photos, files, passwords, and other data on any device you choose. For example, if you turn on iCloud Photos on your iPhone and Mac, you see the same photos on both devices. And if you take a new photo or delete one from the Photos app on your iPhone, those changes appear in Photos on your Mac.

Steps to Sync Contacts from iPhone to iPad with iCloud:

Step 2Then, scroll down and click the iCloud and turn on the Contacts by tapping the Toggle-Switch until it turns green.

Step 3Lastly, on your iPad, follow the same steps, go to the Settings app. Then, go to iCloud and turn on the Contact’s Toggle-Switch to green.

4. How to Sync Contacts from iPhone to iPad with iCloud

iPhone and iPad are devices that can handle SIM cards for storing contacts. Aside from the storage of your iPhone and iPad, it is an alternative storage place for your contacts. Even so, since it is a removable storage place for your device, it will be an easy task if you want to transfer or sync them into another device. However, along with its easy way to sync, it has also a drawback that only iPads that support cellular connectivity use a SIM card. Nonetheless, if your iPad does not have a SIM Card, you can still try all the other possible solutions mentioned in this article:

Steps to Sync Contacts from iPhone with SIM Card:

Step 1First, you need to make sure that the contacts you want to sync are saved on your SIM Card.

Step 2Then, scroll down and click the iCloud and turn on the Contacts by tapping the Toggle-Switch until it turns green.

Step 3Then, you just have to eject your SIM Card on your iPhone’s SIM Card port by using a pin.

Step 4Then, scroll down and click the iCloud and turn on the Contacts by tapping the Toggle-Switch until it turns green.

Step 5After that, insert your ejected SIM Card on your iPad’s SIM Tray. Then, on your iPad, just simply check the contacts on the Phone app and your syncing task is done.

5. Full-scale Comparison Chart between 4 Ways on Syncing iPhone to iPad

To have a successful and seamless flow experience of syncing tasks, it necessitates a thorough analysis of the tool that best fits your task. Even so, if you are still wondering what to choose between the tool or way mentioned above for your syncing task, below is the full-scale comparison chart between 4 ways on syncing iPhone to iPad as your table guide.

6. FAQs about Syncing Contacts from iPhone to iPad

Can I sync deleted contacts from iPhone to iPad?

When you delete a contact on your iPhone it will be removed from your iPhone storage and will be stored somewhere deep in your device in the form of trash files. More so, if you want to sync deleted contacts you cannot do it anymore unless you save them again as your contacts.

Is it possible to sync contacts that are saved on iPhone storage but not on sim?

Yes, it is possible. An iPhone or even an iPad that supports cellular data is capable of saving contacts even without a SIM card which are also available for syncing to another device. All of the steps mentioned above are possible in doing so, except for the SIM Card sync method.

Is it possible to sync data from other apps like Calendar, Reminders, etc.?

Definitely, yes. Just head over to your Settings app. Look for the Calendar or Reminders app and tap on it. From the next panel, select the Sync option.

All the reviewed solutions above are guaranteed to help you sync contacts between iPhone and iPad. All of them do not have a complicated setup and can be done in a matter of seconds. Yet for a simple and easy to maneuver app, FoneTrans for iOS is obviously the tool that you should be using for syncing contacts from iPhone to iPad. There is no complicated setup and it comes with all the necessary features and functions for transferring data and especially syncing contacts from your iPhone to iPad.