Nowadays, there are more and more high-definition smartphones released. You do not need a point-and-shoot. Actually, you can use phone cameras to take photos and selfies perfectly. Huawei P30 Pro is one of the most popular camera phones that can shoot at a very far distance with 10x hybrid zoom. Well, Samsung has announced a new 108-megapixel camera sensor, too.

Pictures in high resolution always take large storage space. Thus, you had better move pictures to SD card on Samsung Galaxy S7 and other Android devices. If you run out of phone internal storage space, you can move pictures, videos, songs and other large files to the SD card, too.

Part 1: How to Move Pictures to SD Card with My Files App on Samsung Galaxy

By moving pictures to your SD card, you can save storage room and improve the phone running speed effectively. Here is the tutorial to transfer photos from internal memory to SD Card. Check if your SD card is inserted into the SD slot on Samsung or not before the process.

Step 1Open the My Files app. Tap Images under Category.

Step 2Select an album based on your need. If you want to move all pictures to SD card, you can navigate to Camera.

Step 3Tap the photo you want to move. There will be a checkmark in the lower-left corner.

Step 5Select Move from drop-down list. If you want to keep the original photos, you can tap Copy instead.

You can calso learn how to transfer data from one micro SD card to another Android. 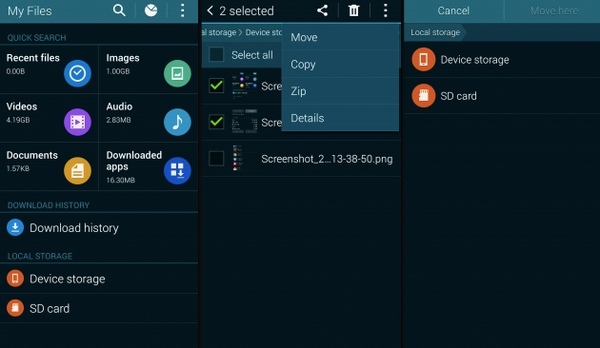 Part 2. How to Move the Selected Pictures and Folders from Internal Storage to SD Card on Samsung

Here is another way to move pictures from the Gallery to SD card on Samsung directly. Just extract all images stored in your Android phone within the device storage section. In addition, you can also use the third-party Android file manager to move files from internal storage to SD card, like ES File Manager and more.

Step 2You can get a list of all storage locations on your Android phone. Tap Internal Storage under Device Storage.

Step 3Choose Images to get all Samsung pictures. You can also check how large the photo file size is.

Step 4Select the album or picture you want to transfer to SD card.

Step 5Tap the three-dot More icon on the top right corner. Choose Move to/ Copy to in the pop-out menu.

Step 6Select the name of your SD card. Set the output path to save the moved pictures. Tap Move/Copy to move pictures to SD Card from Samsung Galaxy S10 and more. 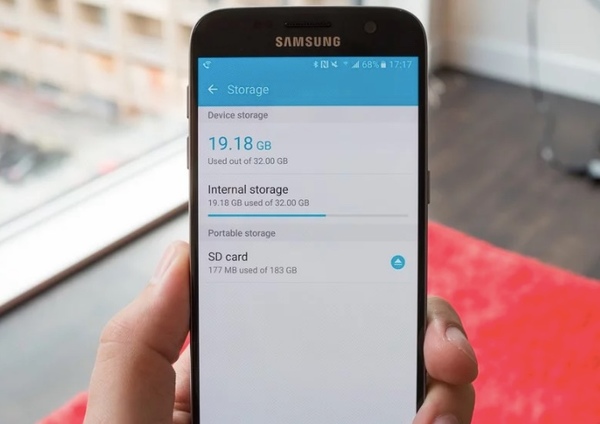 Part 3. How to Move Pictures from Samsung to Another Phone or Computer

Step 2Click Photos in the left pane to get all albums stored in Samsung. Open one folder to find which file you want to move. What’s more, you can create a new album to put favorite pictures together. 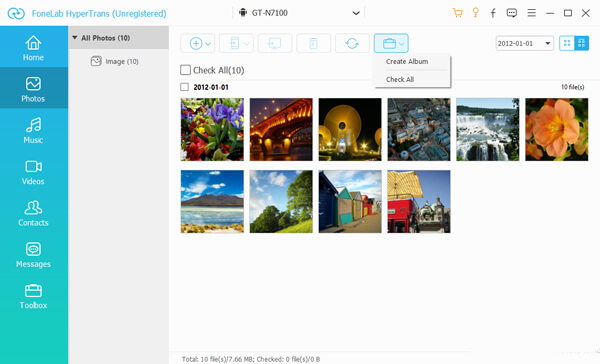 Step 3After selecting pictures, click Export on the top toolbar. You can transfer pictures and albums to the computer or connected iDevice quickly. 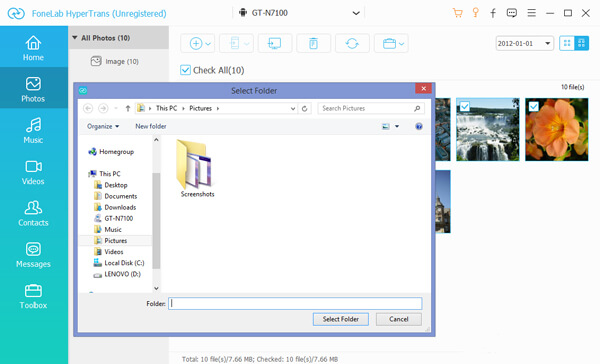 That’s all for how to move pictures to SD card on Samsung phones and tablets. You can follow the above steps to move other files from internal storage to SD card. Furthermore, you can transfer files from Samsung to computer for backup via FoneLab HyperTrans.

By the way, you can set the SD card as the default storage to store further Android files.